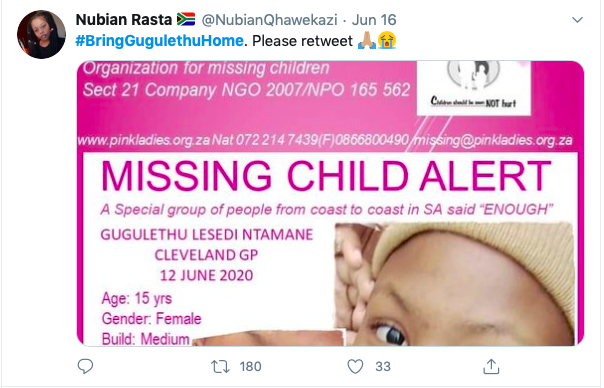 On the same day, Twitter user @Azania_Mhayise shared an image with details of missing 14-year old Danelle Farelle. The tweet read: “Please retweet”. The tweet gained traction with 6000 retweets and 1900 likes. A response in the comment section from @Segopotjie_indicated that the teen had been found. The tweet was an image showing a “Found Child Alert” from SA Community Crime Watch. This response tweet received 13 retweets and 26 likes.

Another one was by Twitter user @ArinaMadzunye, who shared an image containing information about missing person Rudzani Makhwanya, alongside his photograph. The tweet read: “Please retweet”. The tweet generated 1800 retweets and 456 likes. We will continue to monitor and report on this trend in the upcoming days and weeks.

The top topic for Wednesday 17 June was “President Cyril Ramaphosa”, as he addressed the nation on an advanced lockdown Level 3 strategy that allows for further re-opening of the economy. In addition to his pronouncements on lockdown regulations, he also spoke out against the excessive violence that has been perpetrated against women and children in South African communities.

The anticipation of the announcement…

At 17:13 @LeanneManastweeted that the president will be addressing the nation at 20:00. The post was retweeted 820 times and received over 1 600 likes. Then at 17:31, @PresidencyZA tweeted that the president would address the nation on developments of South Africa’s risk-adjusted strategy. This post has been retweeted over 1000 times and received more than 1400 likes.

Replying to @PresidencyZA, @IaMTorito [called for a ban](https://twitter.com/IaMTorito/status/1273279487023763458) on cigarettes for good in order to combat “the immense wealth gap created by this deadly business.” Responding to @LeanneManas, @AnthonyNxazonk3 tweeted, “I Hope he will announce that cigarette will be allowed in level 3 lite.” Some commenters on the @News24 post appeared despondent, replying with “His going to tell us the same sh*t ...i won't even bother” or “Really can’t be bothered.... same shit , different day…”, while others responded on the topic of the cigarette ban.

Conversations around racial prejudice trended within the number one and two under topics by volume.

A seat at the table

A tweet that describes how current conversations on race infer a deeper power imbalance that is still not being addressed, received much attention. On Wednesday 17 June 2020, @BerniceKing tweeted, “Even the statement, “Let’s invite more Black people to the table,” implies ownership of the table and control of who is invited. Racism is about power.” The tweet received 32 000 retweets and 123 300 likes. 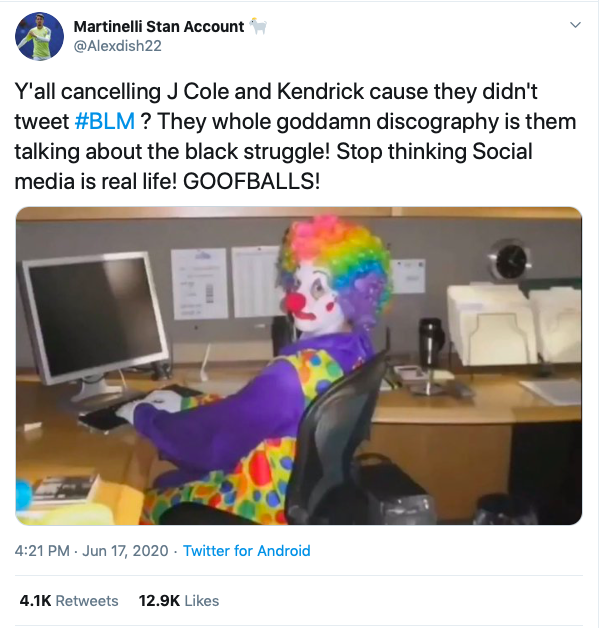 Conversations on ‘cancel culture’ and different forms of activism surfaced following the controversy surrounding the online silence of J Cole and Kendrick Lamar during the recent BLM protests. Some social media users defended the two musicians, citing their consistent support of the movement through their music. On Wednesday 17 June 2020, Twitter user @Alexdish22, tweeted an image of a clown with the message: “Y'all cancelling J Cole and Kendrick cause they didn't tweet#BLM? They whole goddamn discography is them talking about the black struggle! Stop thinking Social media is real life! GOOFBALLS!” The tweet received 3900 retweets and 12 300 likes. 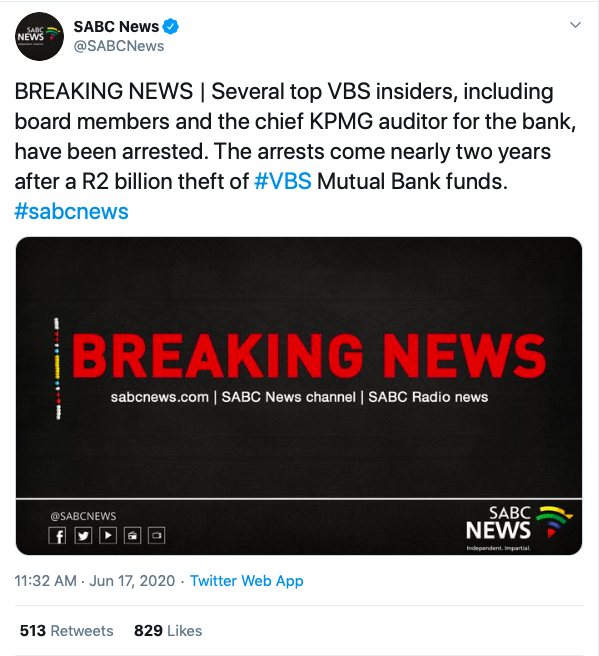 Developments on the VBS scandal received attention from social media users on Wednesday 17 June 2020. @SABCNewstweeted “BREAKING NEWS | Several top VBS insiders, including board members and the chief KPMG auditor for the bank, have been arrested. The arrests come nearly two years after a R2 billion theft of #VBS Mutual Bank Funds. #sabcnews”. The tweet received 508 retweets and 821 likes.

Journalist @PaulivW shared a 9-part Twitter thread explaining the issue, saying, “#VBS robbery: First arrests 8 men have been arrested early on Wednesday morning in connection with the theft of R2,7-billion at VBS Mutual Bank in around 2015 to 2018.” The tweet generated 2100 retweets and 4100 likes.

Other social media users had questions for the EFF regarding their involvement in the scandal. Twitter user, @AbutiJosef ,shared a photograph of the Deputy President and Chip Whip of the EFF, Floyd Shivambu, with the message, “Ke kwa bare di Hawks arrested the first 8 men today connection with the theft of R2,7-billion at VBS Mutual Bank. Fighters are you'll okay?” The tweet received 210 retweets and 638 likes.

The number one topic for Thursday 18 June based on volume was “people”. Tweets that drove this topic were based mostly on issues of institutionalised racism and how it can be curbed. Trending within the sixth highest topic by volume, were tweets related to misinformation about South Africa being spread by US celebrity, Tyrese. 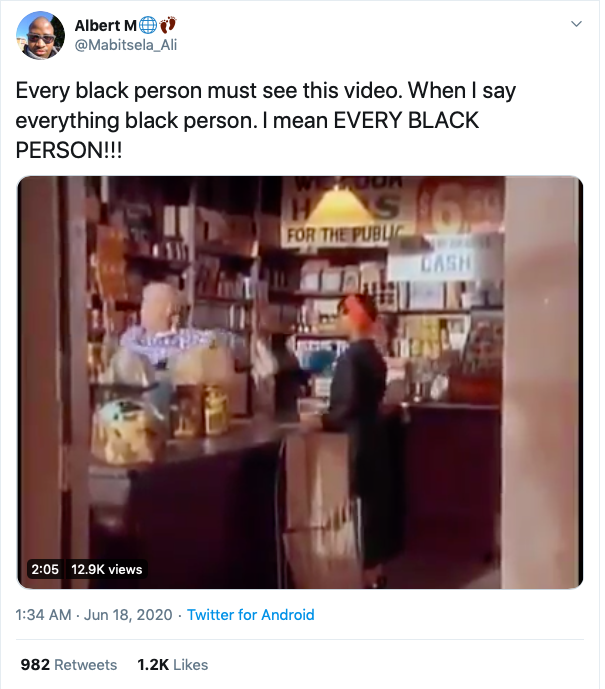 In the wake of Black Lives Matter, many social media conversations are centred on how to dismantle structural racism. Quaker Oats Company’s decision to change their brand name and remove an image from their product called Aunt Jemima, which the company recognises as being based on a racial stereotype, @wkamaubell tweeted, “Just so we're clear, white people, firing Aunt Jemima & giving us Juneteenth off are not the frontlines of defeating white supremacy & dismantling structural & instutional racism. Better schools, a just criminal justice system, access to healthcare was more what we were thinking.” Tweeted at 9:27, this post has been retweeted over 40 000 times and has received more than 160 000 likes.

Earlier in the day, at 1:34, @MabitselaAli [tweeted the snippet of an old movie](https://twitter.com/MabitselaAli/status/1273398596235395074) in which legendary American actor, James Earl Jones, stars as a reverend who tries to expose black people in his community to the structural oppression that they face. The tweet that accompanied the video read, “Every black person must see this video. When I say everything black person. I mean EVERY BLACK PERSON!!!” The tweet has been viewed more than 10 000 times and retweeted over 850 times.

Meanwhile, in South Africa, citizens have been angered by a reverse racism post that was allegedly spread by American singer and actor, Tyrese Gibson. At 8:38, @AdvoBarryRoux tweeted a screenshot of what appears to be the Instagram post made by Tyrese. The post includes an image of white people in shackles and a white wet nurse to a black child. The caption reads, “The flip……...Get to YouTube this is what’s going on in South Africa…………...”. Man’s Not Barry Roux’s post received 280 retweets and 899 likes.

He explains in the tweet that, “Tyrese deleted this post on Instagram where he is lying about South Africa. #Tyrese”. #Tyresemustfall began to be used within the comments of the post. Other South Africans like @naledimashishi alsospoke out, tweeting “Tyrese is arguing with South Africans who live in South Africa that his post isn’t inaccurate because he once visited this country and visited Winnie Mandela. Please make it make sense.” This post has received 222 retweets and 489 likes.