Upset with the ANC

On 07 July 2020 at 20:15, @thabomoetji tweeted that he would be unapologetically voting for Herman Mashaba in the next elections because he is tired of giving the ANC a chance. His tweet reached close to 100 retweets. At 14:42, @KamvelihleGoba posted a tweet that was directed at the presidency. The tweet reads, “Cyril Ramaphosa will go down as the worst President to ever plunder this country. A man who presides over looting of billions during a crises. Who presides over the worst youth unemployment. Who presides over the most unequal & violent society on earth. Cyril Ramaphosa must go!” This tweet received more than 250 retweets and comments.

Clearly people are tired of the corruption, inefficiency, lies and greed perpetrated by the ANC government. @DjNewAfrica tweeted, “We removed Zuma to clean out corruption but according to the auditior general, wasteful expenditure has reached an all time high under Ramaphosa's administration.”

A responder to the post commented, “Let's not pretend Zuma was the only criminal in the ANC please that party is rotten to the core and almost 90% of them are criminals however I can't point out which of that 10% are not, the problem has always been ANC not Zuma alone or Cyril alone.” @DjNewAfrica’s post has been retweeted more than 1 300 times. The cost of the state capture enquiry was also questioned, with @SayEntrepreneur tweeting at 20:46, “State Capture Commission Inquiry has cost R700 million so far. This is likely to hit R1 billion by March 2021. Zondo Commission costs R3.04 million per day and it has sat for 230 days.” The post has received close to 400 retweets and more than 300 likes.

Despite our personal and collective efforts to combat the virus, the reality is that over 4000 people have already died in South Africa from COVID-19 (at the time of writing). @Busisiwe_G released an hour-long documentary chronicling the lives of some South Africans whose lives have been claimed by the virus. The video has been viewed over 6 000 times so far.

@eNCA announced in a tweet that was liked over 300 times: “COVID-19 has claimed the life of another one of our colleagues. Michael Wilson was part of our graphics team and he joined our eTV brand almost two decades ago. Our condolences go out to his family and friends.”

As South Africa’s schools move towards a complete reopening, @IOL reported: “Eleven teachers and 3 pupils have died, while 2 740 teachers and 1 260 learners have tested positive for Covid-19 since the reopening of schools last month”. The tweet was retweeted over 130 times.

@dejachanels tweeted a passionate plea to “please please please wear your masks”, announcing that her brother had just passed away as a result of COVID-19. The thread continued to gain traction, with almost 100 000 retweets and almost 500 000 likes globally. 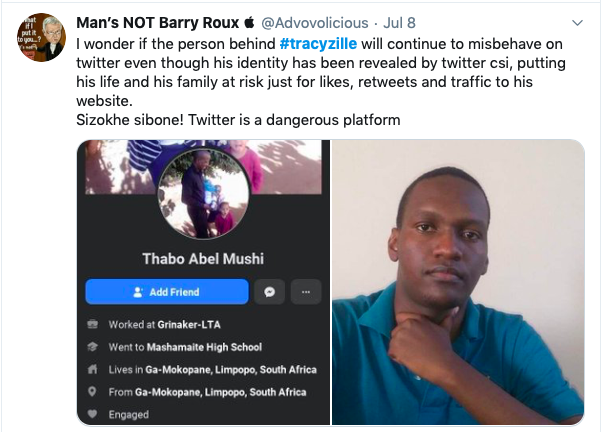 Over the weekend, a post by @jeanleroux detailed how the account user has been exposed. “Earlier this week, [#TracyZille](https://twitter.com/hashtag/TracyZille?src=hashtagclick) was propelled to the top of SA's trending lists by her controversially racist tweets. My investigation for @DFRLab tracked down the man making money from the account: a government official and EFF councillor from Makhado.” The post was accompanied by alinkto the investigation. The post has, at the time of writing, received over 2 200 likes and over 2 500 retweets and comments. The author asserts that, “Tracy Zille's tweets were meant to shock and spark outrage, attracting users to its profile.

This is a case of not believing everything you read and see on Twitter, and once again, be discerning about who you follow.

On the same day, @GoddessLethabo tweeted, “It's concerning that some of you believe poverty persists because poor people don't work hard enough to uplift themselves. I mean, I know privilege is blinding but like when has capitalism ever cared about hard work?” This was liked over 1 700 times and retweeted 981 times. Other users suggested that wealth is not necessarily accumulated through hard work, but through illicit practices. On Thursday 09 July 2020, @MasekoValencia tweeted, “The corrupt are filthy rich. Going around preaching about hard work and determination. Use discernment!” This tweet generated 277 retweets and over 1 100 likes.

Amongst conversations on the hardships faced by black people, Twitter users also took time to celebrate and share black people’s success. @Monsieurponto shared his new luxury glassware collection, “Took me 6 months to perfect this. I hope you guys love it. 100% black owned Luxury Glassware Collection.” The tweet received over 18 000 likes, 5 800 retweets and 301 comments, mostly of congratulations. While Rami Chuene took to Twitter to praise fellow actor Tsholo Matshaba on her great acting abilities, “I remember how we all loved to hate Meme on Muvhango because she was such a bitch. Today we cry, laugh, hope, pray and root for Rakgadi on #TheRiver1Magic. Now that’s the power of storytelling! Take a bow @Tsholo_Matshaba for stirring our emotions. We truly love your work!” The tweet received 9 700 likes and 780 retweets. 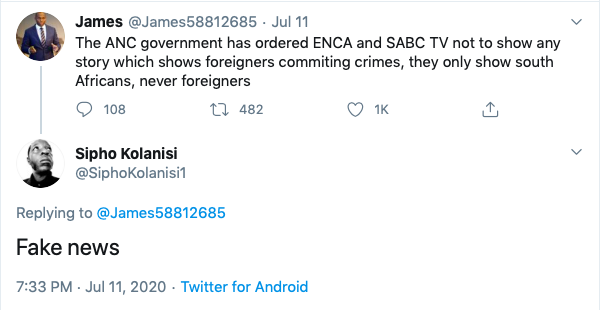 @PatriotMarc shared screenshots of a WhatsApp message that has allegedly been shared by truck drivers who are not South African citizens. The post, which has been retweeted 69 times, said: “This FOREIGNERS and Ali Nika also threatened @uLerato__pillay and @HermanMashaba South Africans Foreigners attacked our policemen and now they feel they can scare us @PennyLebyane you see what you brought in South Africa? #PutSouthAfricansFirst”. It is unclear from the WhatsApp screenshot who sent the original message, but it refers to foreign truck drivers having sourced bullets to be prepared to fight.

@uLeratoPillay tweeted two images of a smashed VW golf and another image of a man’s bloodied face saying that foreign truck drivers had attacked the man who, she claims, was an off-duty South African truck driver. Although this information was not verified, people still chose to retweet her story 365 times and some even commented about taking action against the alleged attack.

The number two top topic for the weekend “South Africans” was driven primarily by two posts that garnered significant social media traction. Following the truck driver protests sparked by the #PutSouthAfricansFirst movement, social media influencer parody account @uLeratopillay posted an unverified[tweet](https://twitter.com/uLeratopillay/status/1282003528299491328) that, “In Cape town one white owned Truck Company doing deliveries at Transnet fired 150 Foreign drivers and replaced them with South Africans,That is what we like to see happening. Durban Indians and ANC Politicians owned trucking Companies should copy and paste #PutSouthAfricansFirst”. The tweet received significant online traction with over 2 200 likes and nearly 750 retweets and comments. Comments were generally in support of the movement.

Another tweet by @James58812685 stating, “The ANC government has ordered ENCA and SABC TV not to show any story which shows foreigners committing crimes, they only show south Africans, never foreigners” garnered significant social media attention with almost 1 500 likes, retweets and comments at the time of writing. One of thetop engagements around the tweet quickly dismissed it as “Fake news”. 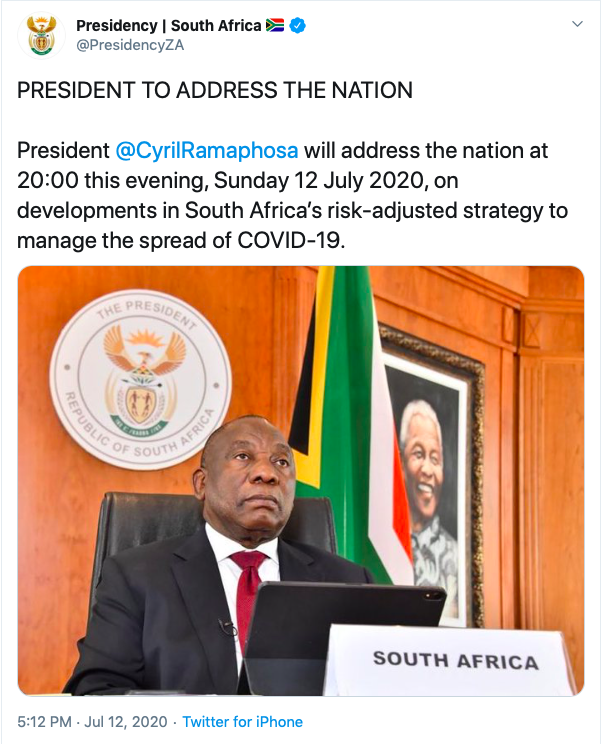 President Cyril Ramaphosa addressed the nation on Sunday night on the need for an amended response to the COVID-19 pandemic, considering the recent sharp increase in cases. @PresidencyZA announced on Sunday evening that the president would share developments on the risk-adjusted strategy for dealing with the spread of COVID-19. The tweet was liked and retweeted over 2 600 times.

The address sparked much discussion on social media about the controls that have been put in place thus far, and on the effectiveness of the government’s response. These conversations resulted in a spike in activity on Twitter on Sunday evening and contributed to mentions in many of the top 10 topics by volume, including “President” and “#cyrilramaphosa”, which had almost 47 000 and 50 000 mentions respectively. “South Africans” was also a top topic by snapshot and included many mentions of the president’s address.