Load shedding has been reimplemented across the country as economic activity resumes under less stringent lockdown conditions. The terms “load shedding” and “loadshedding” were mentioned about 8 000 times on Twitter yesterday.

@eNCA reported that Eskom would implement stage 2 load shedding, while more localised community-based accounts such as @MidstreamMES [tweeted](https://twitter.com/MidstreamMES/status/1283429733749989378)​information on how their areas would be impacted. @CityofCT announced that “No load-shedding for City customers today. The City will protect most of its customers from Eskom's load-shedding today. Eskom customers will unfortunately be shed at Stage 1”. None of these tweets were shared widely, with @CityofCT’s tweet being the largest, with approximately only 250 likes, retweets and comments.

Rather than sharing the information, Twitter users such as hip hop celebrity AKA (@akaworldwide) shared images of his candlelit dining table with the caption, “Don’t let load shedding ruin the vibes, have yourself a lil night braai”. His tweet was liked over 4 600 times and retweeted over 260 times.

South Africa’s health system is under severe strain as a result of the COVID-19 pandemic. The Eastern Cape’s health system has recently been described as “an epic failure” in a recent BBC report. A post by @AndrewWJHarding on Wednesday 15 July 2020 gained traction the following day. The tweet contained the BBC News article titled, “Inside South Africa’s ‘hospitals of horrors’”. The tweet read, “"An epic failure of a deeply corrupt system..." Our investigation into Port Elizabeth's #COVID19 response in South Africa's Eastern Cape:”. This post received 252 retweets and 189 likes.

Some users argued that the Eastern Cape’s health sector crisis is not receiving enough attention. TV host @PhilMphela tweeted, “Re busy ka #AlcoholFreeSA. There is a health services crisis in the Eastern Cape that is not getting attention. What is happening in EC should be the biggest story of this COVID-19 pandemic hitting South Africa. Not freaken alcohol bans. We lack leadership! #ECHealthCrisis”. This tweet received 65 likes and 175 retweets.

Conversations about unemployment and job losses received considerable attention. News outlet @News24 shared an article titled, “Millions have lost their jobs during the lockdown, impacting social welfare and food poverty”. The tweet read, “Three million – that is how many people in South Africa have lost their jobs during the nationwide lockdown so far, according to a new study conducted by 30 social science researchers from five South African universities. | @azarrahk”. This was retweeted 250 times and liked 176 times.

At 11:21 on 17 July 2020, @AfricanSoil [tweeted a video](https://twitter.com/AfricanSoil/status/1284055692039598080) of Makhaya Ntini sharing his experiences on the South African cricket team. In the video Ntini describes how he was excluded from social events and gatherings, and how this filled him with a sense of loneliness. @_AfricanSoil added to the tweet that, “Racism in South Africa is very deep and racists will never understand how this affects black people psychologically”. The post received more than 1 100 retweets and comments, along with more than 1 500 likes.

At 11:59 on the same day, @kaymahapa [tweeted of Ntini’s experience](https://twitter.com/kaymahapa/status/1284065115600560129) that, “I'll never understand white people. Ga bana botho these folks. A white person enters a black dominated space and everyone goes out their way to make them feel welcomed.” The post was retweeted and commented on more than 500 times and it received 1 100 likes. Commenting on the tweet, @kadillacgrillz responded, “We can’t be Stooping to their level by saying we must also make them outcasts isn’t the solution... love during an endured pain sometimes works for the better and by that I mean we jus gotta keep doing us till they realize how stupid they are”.

On the pitch this past weekend, some cricketers took a knee in a display of solidarity against racism. At 20:24, @AlastairMcA30 tweeted an image of the cricketers saying, “This simple gesture of solidarity with their countrymen, by cricketers, seems to be upsetting a lot of white South Africans. Which kinda emphasizes why it needed to happen in the first place. #Blacklivesmatter #takethekneee”. The post was retweeted more than 160 times and received more than 700 likes.

Saturday 18 July 2020 marked what would have been Nelson Mandela’s 102nd birthday. Many Twitter users, including prominent world leaders, shared their thoughts on his legacy. President @CyrilRamaphosa shared a video where he praises Nelson Mandela’s legacy, encourages everyone to continue fighting against injustices, and pays homage to Zindzi Mandela following her recent passing just days before International Nelson Mandela Day.The tweet read, “Nelson Mandela was undoubtedly one of the greatest leaders of our time. A hero of our liberation struggle, he belonged to peace and freedom loving people everywhere. In his memory, we must strive harder to build societies rooted in mutual respect, tolerance and reconciliation.” This received 314 retweets and 1 400 likes. Shortly thereafter, @CyrilRamaphosa shared four photographs of himself alongside Nelson Mandela. The tweet read, “We remember Madiba today not only as a courageous and inspiring leader, but as a person of great kindness and understanding. There are few people who will ever rival his place in history, but each of us, in our own way, can daily strive to be the better person he taught us to be.” This tweet generated 1 300 retweets and 8000 likes.

Conversely, some users expressed disdain for Nelson Mandela’s legacy. MP and former EFF spokesperson @MbuyiseniNdlozi tweeted, “Mandela is no longer a useful figure to confront injustices of racial violence, exploitation and marginalization. His name is used each year to neutralize black people into a false racial unity, peace and reconciliation. Mandela himself allowed this when he was alive!” This gained traction with over 3 100 retweets and 11 700 likes.

In response to this kind of rhetoric, South African actress @PearlThusi tweeted, “People who use Tata Mandela to get some woke Twitter engagement here bore me. No one is perfect, and I’d love to see their credentials on how they fought for justice in a way that endangered theirs and their families lives.” This was retweeted 334 times and likes 2 400 times.

Apartheid and Service Delivery (or rather non-delivery)

The contentious post was retweeted over 2 000 times and it received more than 6 000 likes. She further commented on the post, “In essence, after Mandela, the ANC has been run by greedy old people that put themselves first.”

@perthRSA swiftly [responded](https://twitter.com/perthrsa/status/1284893339779833859), “Mate... it’s easy to perform when your servicing the smallest population and designing a system that only benefits a few. ANC is doing its but please don’t overlook history”. Other tweets sprouted in response to @AmkeCebekhulu as people like @LeratoMannya tweeted that Service Delivery couldn’t be a problem if the Apartheid government were only catering to the needs of about 20% of the population. Continuing the conversation, @AmkeCebekhulu responded to @LeratoMannya to ask “Why are your children in white schools? Why didn’t you go to a school ekasi?”. At this point, @LebzMashego responded with a tweet that read, “ Idk what’s not clicking, but township schools were deliberately & grossly underfunded to disenfranchise black people for generations. ‘Ekasi’ wouldn’t even exist without apartheid spatial planning, which was another tool to further economically & socially exclude black people.” This post was retweeted close to 300 times and it has received 422 likes. 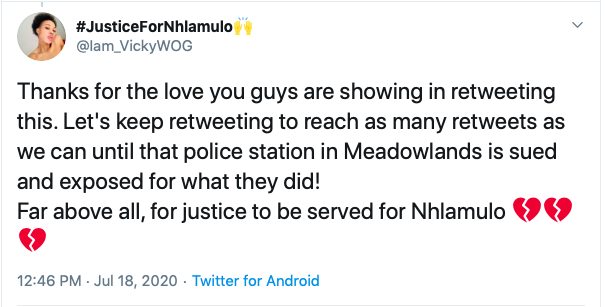 A post about a young man named Nhlamulo Junior Mabunda who was allegedly stabbed to death in Zone 2 Meadowlands, Soweto on 4 July 2020 gained traction on Twitter. Nhlamulo was reportedly stabbed during a mugging by nine assailants who took his iPhone. It appears that the hashtag #justicefornhlamulo was started by@Iam_VickyWOG, in an attempt to seek justice for his killing after claiming inaction by police. The post has been retweeted 5,000 times and like nearly 2,000 times. A tweet by the same author calls for people to continue retweeting the post until the police station dealing with the case is “sued and exposed for what they did”. This post received only 7 retweets and 5 likes. 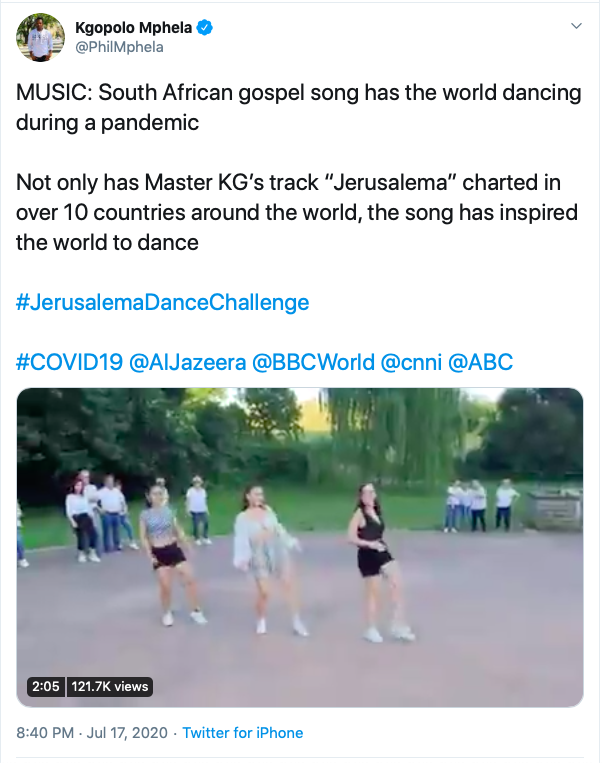 Released last year, Jerusalema, a gospel song remixed into a house track by South African DJ Master KG has gained international attention as people across the world have started dancing to it, in a hashtag named #JeruselamaDanceChallenge. The DJ himself tweeted, “The World Is Dancing

#​JerusalemaDanceChallenge. When we created this song I never thought it will do this!!! GOD is amazing.” The tweet included a video of people dancing to the song, which received over 150 000 views, 14 400 likes and 3 500 retweets. @PhilMphela tweeted, “MUSIC: South African gospel song has the world dancing during a pandemic Not only has Master KG’s track “Jerusalema” charted in over 10 countries around the world, the song has inspired the world to dance #JerusalemaDanceChallenge ”. The tweet also included a video of a group of white people dancing to the song. The tweet received over 119 000 views, 6 000 likes and 2 600 retweets.

A deep analysis on any of these issues is available on request.