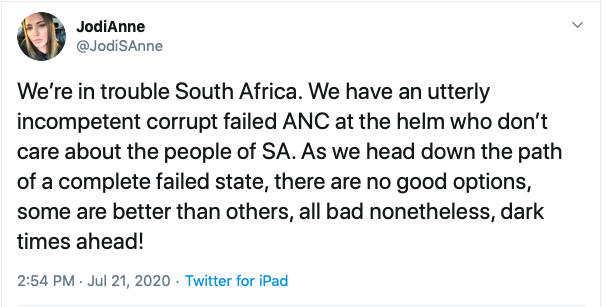 On Tuesday @uLeratoPillay [tweeted that](https://twitter.com/uLeratopillay/status/1285337261815595016) poverty in the country is real, people are starving, and that there is no help coming from the government. The post was retweeted more than 60 times and it received 138 likes. There were only 6 comments to the post and all of them reflected the opinion of the initial tweet.

Mbuyiseni Ndlozi criticised the leading party in the Western Cape and their opposition saying that the DA are the “lowest order of political imagination”, and that they are similar to the post-1994 ANC. His post was retweeted more than 500 times and received close to 3 000 likes. Within the comments to the post, the EFF also received criticism, with one responder claiming that the difference with the EFF is that they act like they are on the side of the poor when really they are “For The Bellies Of Their Own Lusts”. Another commented that it is the EFF who are of the lowest order of political imagination because of their stance toward foreigners.

@SizweLo tweeted about the reasoning used by Professor Sampie Terreblanche at the Truth and Reconciliation Commission (TRC) hearings in 1997 regarding taxation of the wealthy. He added that this was accepted by the TRC but rejected by the ANC. His post has been retweeted more than 800 times and has received more than 1 000 likes.

Later in the day, @JodiSAnne tweeted her frustration with the South African government stating that as a country, we are in trouble. The post was retweeted more than 200 times and it received close to 1 000 likes. Commenting on the post, @ZthulisileThuli urged @JodiSAnne to join a group related to a protest that is being called the 1 Million March.

South Africans expressed their frustrations with the government on Twitter. Against the backdrop of stricter lockdown regulations, and a looming economic crisis, many South Africans posted critical and satirical tweets about the government. These drove volume under the top topic by volume, “people” which garnered over 65 000 mentions, as well as under the top topic by burst, “government”, which had over 13 000 mentions.

South Africans’ current focus regarding the impact of the pandemic seems to have shifted away from the health implications to the economic and financial. @SABCNews reported that the South African government has secured a R5 billion loan from the African Development Bank. This tweet was liked over 1 300 times and retweeted over 1 900 times. Many comments to the post poked fun at the inevitability of the money being stolen or squandered. @robzinterris tweeted, “We all know half of this money will end up in people's pockets as usual... On fact the biggest question is how we gonna pay back the money!?!”. In response to a @Fin24 tweet reporting that the South African government was seeking a $4.2 million loan from the IMF, @kaymahapa retweeted, [commenting that,](https://twitter.com/kaymahapa/status/1285918200589430792) “We need an ‘I Blew It’ episode of the South African government and that R500 billion”. The tweet, which presumably refers to the COVID-19 relief fund secured by the government, received almost 3000 likes and retweets. 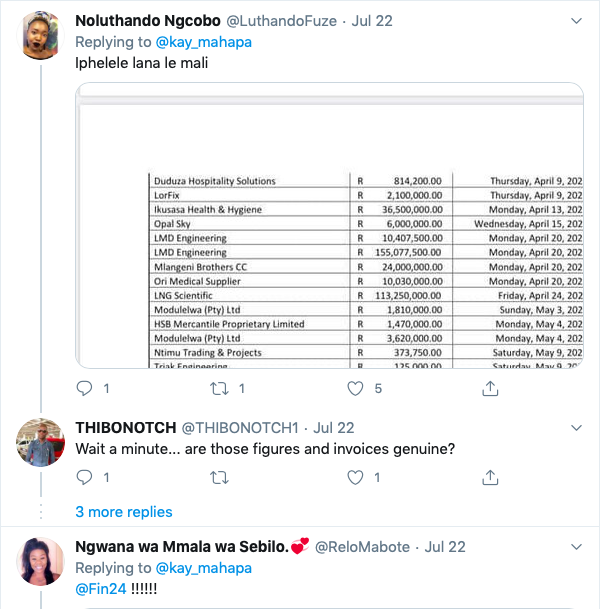 The government was further chastised on Twitter for an erroneous tweet that was posted yesterday regarding the highly controversial alcohol and tobacco ban. The South African government tweeted a correction to its earlier announcement that alcohol and tobacco sales would be banned throughout the lockdown. The 2-part thread, which was liked and retweeted almost 2 000 times, stated “1/2: This account posted a tweet earlier today which said that the ban on the sale of alcohol and cigarettes would remain in place throughout the lockdown period. This is incorrect. The sale of alcohol and tobacco products is prohibited under the current Level 3 regulations.

2/2: This decision may be reviewed at any time by the relevant structures should the conditions which necessitated it change. We regret any confusion the tweet has caused.”

This communication blunder was made on Wednesday, the same day that South Africa’s restaurant industry was staging protests across the country in response to the ban on alcohol sales and the resultant impact on business. @ezaap shared a video of a 200m long table laid out in Wellington in Cape Town with 1 000 empty seats, representing the scores of jobs lost due to the lockdown regulations. The tweet was liked and retweeted almost 3 000 times.

Twitter users directed tweets at President Cyril Ramaphosa, criticising the proclamations made during his address to the nation yesterday evening and blaming him for the country’s current dire economic situation. @HermanMashaba called on Cyril Ramaphosa to “be a PRESIDENT” and to “put South Africa and South Africans first” by taking action against looters of the relief fund. His tweet was liked and retweeted over 2 500 times. @Eusebius responded to the president’s assertion that he would root out corruption, stating “Your government has a piss poor record on fighting corruption”. The tweet was liked over 3 600 times and retweeted almost 1 000 times. @samkelemaseko accused the president of perpetuating the betrayal of the promise to reduce inequality in a tweet that was liked and retweeted almost 500 times.

@FloydShivambu, a senior member of the EFF, tweeted that South Africans need to realise and accept that president Cyril Ramaphosa’s role is to protect white interests. His tweet was retweeted over 450 times and received over 1 600 likes. Another prominent EFF member, @MbuyiseniNdlozi expressed that South Africans cannot trust a billionaire president who could have dealings with those who are looting the relief fund. While histweetwas liked over 3 400 times and received over 850 retweets, it was also met with opposition. @TomiRikhotso poked fun at Ndlozi’s default opposition to anything the president says or does when hetweeted,“Ramaphosa: It’s Thursday. Ndlozi: No it’s not Thursday, it’s the day before Friday. #cyrilramaphosa,”. Similarly, @robzinterris tweeted,“Dr Ndlozi is like that guy at the stadium who blows the Vuvuzela close to your ears... #cyrilramaphosa”. Each of these posts received approximately 800 likes and retweets.

Other Twitter users employed humour and satire to express their criticism. @MntakaSkhumba tweeted a picture of the president sleeping implying that this is his response when South Africans ask about what happened to the R500 billion relief fund. This received almost 1 000 likes and retweets. @MaqhaweNgubane[tweeted](https://twitter.com/MaqhaweNgubane/status/1286373467982626816),

“SA citizens: We are worried about corruption!!

SA President: Me too beloveds, me too”.

While many Twitter users blamed the government, and in particular, the president, for the current difficulties being faced as a result of the pandemic and lockdown, others placed the responsibility on citizens.@AdvoBarryRoux tweeted,

This was liked almost 5 000 times and retweeted over 1 100 times. Most replies to this tweet voiced agreement, like that of @MissB20_10, who tweeted, “It will be a mountain to climb to fix these problems especially ANC voters problem, those grant recipients don't see anything wrong with ANC unfortunately😟”. @SneKhumaloSA implored South Africans to not be complacent about the depletion of the COVID-19 relief fund, in a tweet that sought to emphasise the magnitude of the problem. They tweeted, “I honestly don't think most South Africans understand just how much money is R500 Billion. That's like half a trillion rands. That the ANC blew in just +120 days. Half a trillion rands guys..” The tweet received over 1 000 likes and over 360 retweets. 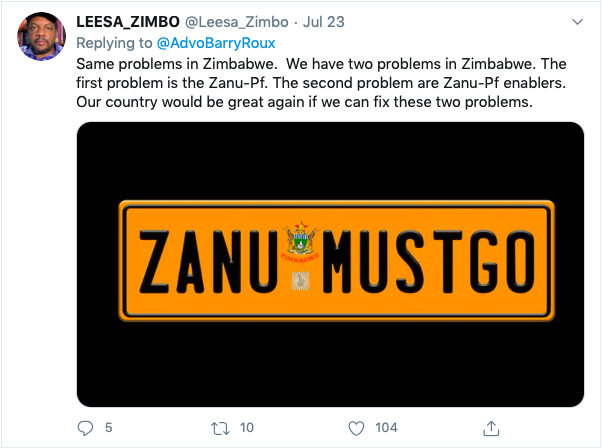 The Hospitality Industry is struggling

Several posts stemming from last week’s nation-wide restaurant worker strike received significant attention on social media. @lunchout2tweetedabout the police response to the restaurant worker strike in Cape Town CBD, speculating that “using stun grenades and water cannons on peacefully protesting unemployed restaurant staff in Cape Town wouldn’t be good for our tourism industry.” This tweet received only 170 retweets and comments and 650 likes. @VusiThembekwayo authored atweetthat gained more attention (1,300 retweets and comments, and 3000 likes), saying that “every South African should stand with the restaurant trade”. This call for unity is contrasted by a more divisivetweetauthored by @cherylroberts00 saying that white restaurant owners “exploit their workers who are mostly blacks,” and that “the white owners are screaming jobs being lost and workers suffering during the lockdown but the bosses been paying low wages for a long, long time.” This tweet received less attention, however, with just 171 retweets and comments and 250 likes.

A top topic driving social media conversation this weekend was HIV and AIDS. This theme appeared under two of the top three topics by volume, “people” and “love”. The words HIV and AIDS were mentioned almost 5 000 times on Twitter over the weekend, up 21% from the previous two days.

HIV denialism under President Mbeki and his administration was a topic that resonated with many South African Twitter users over the weekend. Twitter user @Advovoliciousposted, “Mbeki refused to roll out a full scale HIV treatment programme, which according to a Harvard study led to the premature death of some 330 000 people between 2000 and 2005 during his presidency. Mbeki is not innocent, he has blood in his hands he denied South African's ARVs”. The post received over 500 likes, retweets and comments. #Mbeki trended on Sunday with many highlighting both the good and the bad of his Presidency. One user posted, “Mbeki's Administration was filled with denialism in a lot of issues: 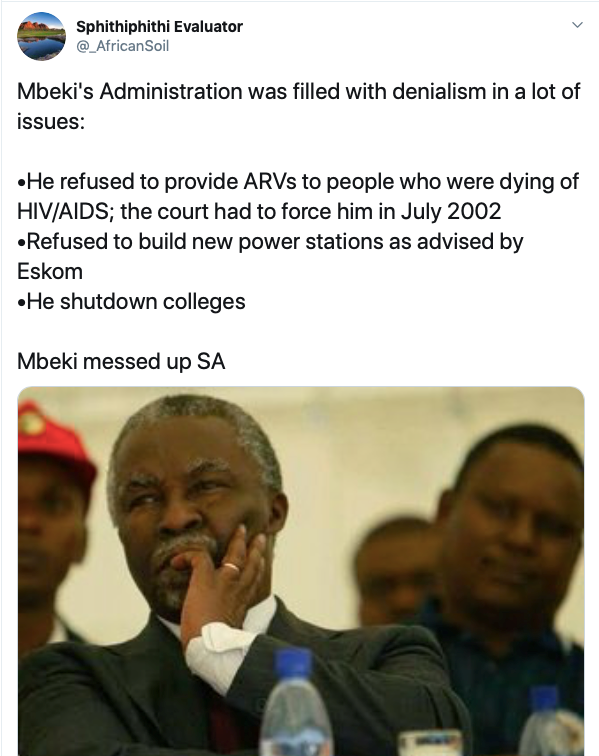 Another Twitter user took the opportunity to call out Manto Tshabalala Msimangstating,“History didn’t absolve Manto at all. She refused to give people ARVs and instead suggested garlic and beetroot for HIV. Millions on ARVs today are alive, many more would be alive today - no thanks to Manto.” In response to a tweet stating, “Rest in peace Manto Tshabalala Msimang... and forgive us for laughing at your suggestion that beetroot, ginger, garlic can boost our immune systems against viruses.🙏🏾🙏🏾history is absolving you.” Discussions about the HIV denialism of the previous administration continued well into Sunday.

The weekend also saw many sharing personal stories and expressions of solidarity for those living with HIV/AIDS. A top tweet in South Africa by @itsmuluba posted on 24 July read, “I was born w/ HIV. Medication keeps me healthy & my HIV virus undectable”[sic] which makes me untransmittable. It’s like managing any condition.I remember the first time I was called “dirty & un-clean”. I am a beautiful smart black woman living w/ #HIV. Treat me as such - Management.” The post has garnered over 5 000 likes and over 1 400 retweet and comments at the time of writing.

The post received over 186 000 likes and has been retweeted nearly 50 000 times world-wide since it was first posted on 23 July.

Issued by the Centre for Analytics and Behavioural Change. Visit cabc.org.za