The hashtag #VoetsekANC has received considerable attention in recent weeks. Many Twitter users have used it as a tool to express frustration towards the current ruling party. Yesterday, @ChristoConradi1 tweeted, “Did you notice? #VoetsekANC is used by Indian, Coloured, Black and White alike?” This post generated 181 retweets and 578 likes. 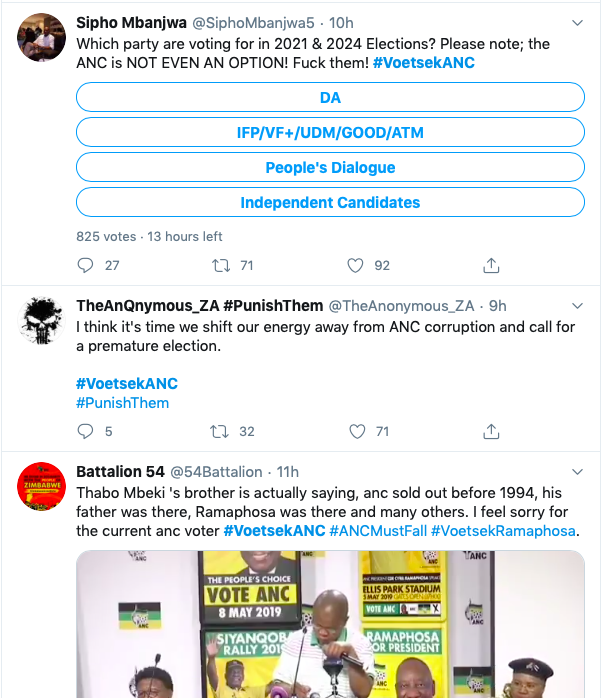 Kwasa Lugalo, a 19 year old woman, trended on 18 August 2020 after her ex-boyfriend stabbed her to death. The story dominated Top Topics by Snapshot and Top Topics by Burst. Her death created an outcry over the horrifying extent of gender-based violence in South Africa.

Following news of Kwasa’s death, Twitter conversation quickly began to reflect the reality that South African women face owing to gender based violence. “Women” trended as the 3rd highest topic under the high volume posts for the day and all major drivers of conversation within that topic spoke about the safety of South African women.

At 10:11, @VilakaziSoul tweeted “Killing a girl because she dumped you? What is happening in South Africa?” This post was retweeted more than 1 800 times as Twitter account holders engaged in conversations on Femicide for the day following the brutal stabbing of 19-year-old Kwasa Lugalo. Responders to the tweet called for the accused to be named and shamed. Other responders advised that in an act of cowardice, he had killed himself. It was later revealed that the attempt on his own life was not successful and that he is under police supervision at the hospital.

@Mphosssible felt that a harsher punishment was needed for men who kill. She tweeted that “Men will still kill us because they want to. Until they pass a bill to hang all those who kill another day another #justiceforkwasa #ripkwasa”. This post was retweeted more than 1 100 times. @itssimm [asked](https://twitter.com/itssimm/status/1295619317132865537) if she really felt that passing a bill would make men stop killing to which @Mphosssible responded, “I’d like to believe that it’ll at least minimize these senseless killings? At this point we stand on nothing!”

@suzebaby who changed her Twitter name to JusticeForKwasa [tweeted](https://twitter.com/suzebaby/status/1295639390656630786) “I’m actually so sad. The lives and safety of South African women and children is a joke. No matter what we say or do, it falls on deaf ears. My heart hurts.” This tweet reflects the continued frustration of South African citizens who wake up to news about yet another senseless and violent crime committed amongst the most vulnerable in our society. 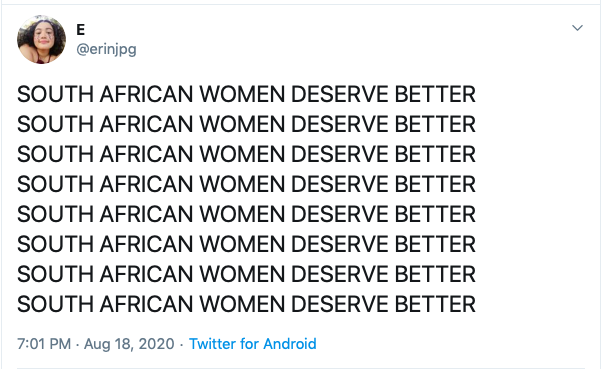 Justice for victims of GBV

Casper Nyovest’s post was retweeted close to 4 000 times and it received more than 12 000 likes.

@Muzi37361964 responded to say that the death penalty is the only way however @masetimazwi [explained](https://twitter.com/masetimazwi/status/1295779258086850560) to him the intricacies of enacting a law of this nature due to the protection of lives enshrined in South Africa’s Bill of Rights.

@zeexonline retweeted a post that displayed police men in protective gear, saying that the police need to be on guard outside Tops and Makro as the ban on alcohol is lifted. @zeexonline tweeted “kodwa when it comes to making sure women and children are safe la ngaphandle it’s crickets”. The post was retweeted close to 1 000 times.

@jodakgosiitweeted“GBV is the most pervasive form of human rights violations and prevents women and girls from reaching their full potential. It is an obstacle to women living dignified lives, free from fear.” This post has been retweeted more than 800 times. Within the comments, @jodakgosii expressed dissatisfaction with the steps taken by the government to curb the ongoing scourge of GBV: “What has the government done about it? They lied and told us that all accused sexual offenders would not be granted bail. Oh and that useless 16 days of activism thing they did last year”.

In a post that shows how helpless South African women feel towards understanding what they’re meant to do when faced with instances of GBV, @MatlhagaKebo tweeted “Why don’t you report it to the police?” - she did. “Why don’t you just leave the relationship?” - she tried. “Why don’t you involve his family?” - she did. So I’m going to ask this question again, what are we supposed to do?” This post was retweeted more than 3 500 times. Responding to the question, @AndiswaPooe felt that “if government is not serious about crime in general, we will sing this song until Jesus comes.”

Conversations about unemployment and poverty trended in several drivers under the top topics by volume and burst. On Tuesday 18 August 2020, @dalumuzimabhena tweeted, “Hello, my Name Is Dalumuzi. A young man from Bulawayo, an Electrician by profession. If you know anyone who needs an electrician's services, please DM. Kindly retweet please. You never know, my next client might be on your TL. Thank You, Ngiyabonga, Maita Basa fellow Zimbos.” This gained considerable traction yesterday with over 500 retweets and 487 likes.

On the same day, a tweet containing xenophobic undertones resurfaced from 10 June 2020. The tweet contained photographs of white people living in a poor informal settlement. The tweet read: “Poverty has no colour. Julius Malema wants us to hate all white people and to love all immigrants and we are saying to him noo! We #PutSouthAfricansFirst before the citizens of Zimbabwe, Malawi, Somalia,Nigeria, etc. Why must we givejobs & healthcare to Zimbabweans and NOT”.

The power of language

Many Twitter users expressed their reflections on the weight and impact of language in shaping society. On Tuesday 18 August 2020, popular South African TV personality @MinnieDlaminishareda selfie of herself with a traditional hairstyle. 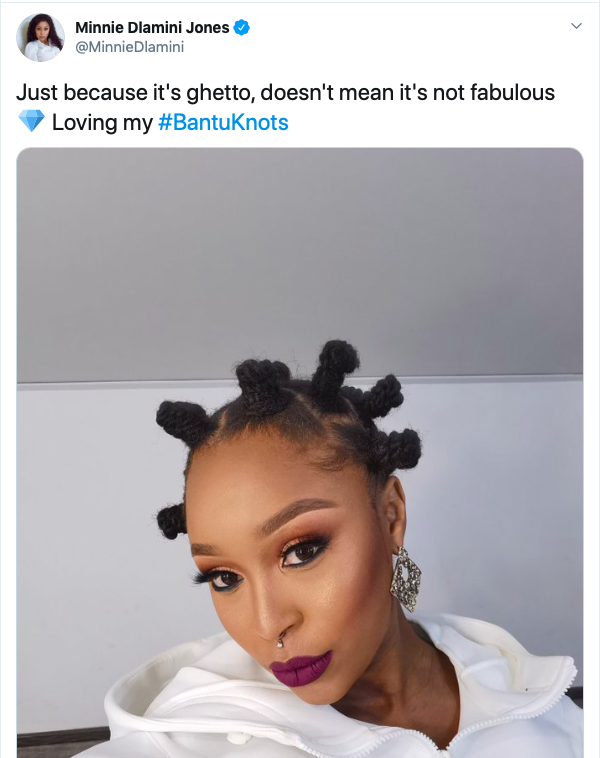 This post got over 3 200 retweets and 14 700 likes. @t0nite0ne criticized this post by quoting it in aretweetthat read, “We feed into racism and hair discrimination when we say things like this. Absolutely nothing is ghetto about natural black hair styles - whether that’s Bantu knots, locs, braids, etc. We need to destroy this notion.” This received a lot of attention with nearly 9 000 retweets and over 24 700 likes.

The following day, @ZikhonaTshona echoed this sentiment by sharing a screenshot of the comment section on Minnie Dlamini’s Instagram post. The tweet read: “Well, Zulaika said it”. The screenshot contained a message from teen activist Zulaikha Patel which read, “You look stunning, but don’t use the word ghetto…” This tweet generated nearly 500 retweets and over 1 200 likes.

On the same day, @missandisa[ tweeted](https://twitter.com/missandisa/status/1295971237248806913), “We can’t call out racism everyday and then have black people using language that feeds into racist views about blackness.” This tweet got 171 retweets and 513 likes.

Some users commented on the diversity of expression. @ashyp5 retweeted a post containing a video interview of a Cape Town FC football player responding to questions in Afrikaans. The[ tweet](https://twitter.com/ashyp5/status/1295970068212461569) read: “The thing I love most about this interview, is that he’s completely relaxed, he understands her, she understands him, and we understand them both. Authentic South African Cultural Diversity, a thing of real beauty if we’re just able to embrace each other with our differences.” This tweet received 160 retweets and 767 likes.

The impacts of the economic shutdown are being felt by big and small businesses. Small businesses are using social media to reach out to a broad audience to help them spread the word of their service offering. Young South Africans are beginning to consider wealth in new ways.

On 19 August a Twitter user who calls himself your “go-to finance bro” tweeted some worrying figures about the performance of big businesses in South Africa, calling it “season 1 of the horror show”. According to the information that he posted, Standard Bank’s headline earnings are down 44%, Liberty have recorded a R2.3 billion loss as more people are dying due to the pandemic. His post trended during the second half of the day within the topic “Business”. It has been retweeted more than 400 times and received close to 1 000 likes. 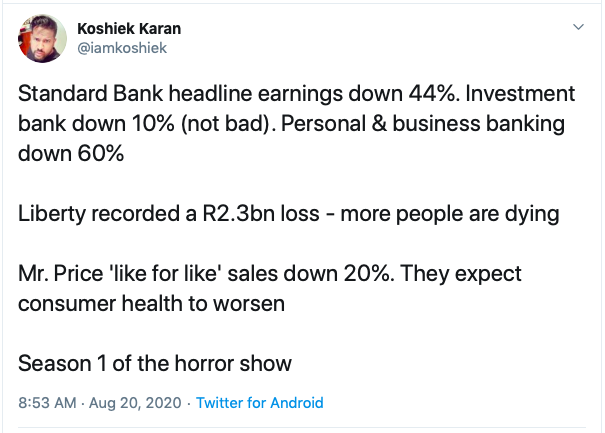 Also within the topic “Business”, Information about the Experian Data Breach had Twitter users talking. On 19 August 2020, around 8pm, @MokoenaDeet weeted an article published by Business Insider SA, which reads, “Personal details of 24 million South Africans may have been hacked after attack on credit bureau. This post was retweeted more than 1 100 times. Cash strapped South Africans who commented on the post wanted to know if the company that hacked the system deleted their debts. @BrownSkinGhel asked “Did they delete our debts?”, @MModimo tweeted “Imagine waking up tomorrow to a zero balance on a home loan!”. @SiwelaSs also asked “Are they deleting our info and debts?”. @brian_royalb explained to commenters on the post that “people saying "did they clear our debt?" It doesn't work like that

-Your debt records don't sit with the credit bureaus. Those records sit with your creditor (Bank, University)

-To "delete" your debt you'd have to hack your creditors directly”

The second highest trending topic for the day was Port Elizabeth. This trend was driven primarily by 2 posts that were made by young entrepreneurs in Port Elizabeth who shared information about their businesses.

At 14:31, @LingeNontyatho tweeted some images of a man in a mask holding cupcakes. 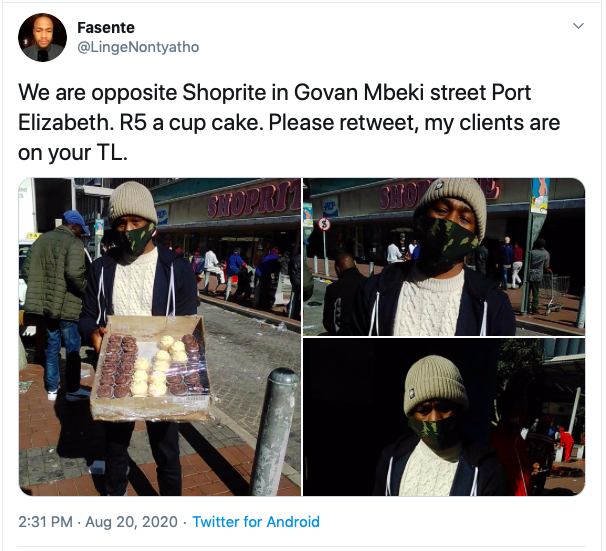 This post was retweeted more than 1 700 times and it received a similar number of likes. Responders commented that they would come by to see him and asked if he does deliveries. This showcases how valuable social media can be to small owned businesses that are looking for a cheap way to get a quick message out to a large audience.

On 19 August 2020, Also in Port Elizabeth, @LwaziMagele tweeted images of a woman with very healthy looking hair. The tweet read, “Your wig specialist in Port Elizabeth”. The post was retweeted more than 280 times and it received close to 3 000 likes. Potential customers responded to the post providing their contact details and asking for more information. @LwaziMagele was also able to provide a price list to help potential customers understand the costs associated with her service.

Compiled by the CABC